Hey Hey Hey!!  We have a new blog design!  Linnea sat down with me, Dahlia, Momma, and Iris, and we all found a background and color scheme we all liked!  Dahlia got to contribute with the "Firefly" header (she loooooves the show... so do we, though not like she does) and her butterflies, Linnea got her ocean colors, and I got my steampunk stopwatch.  All in all, I like it.  (I'd have made the background look like a dark steampunk night, but as everyone pointed out, we don't want it to look like a creepy blog).

Another new girl (Momma assures us it's the last one for a while... she says TechGuy hasn't had time to put up another shelf for us, and we're out of room) arrived Tuesday night.  After conferring with her for two days, (the shortest it's ever taken any of us, other than Dahlia), she introduced herself. 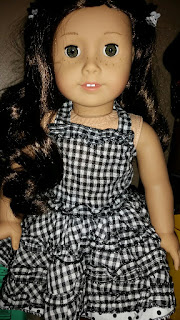 Delia June (she tells me that she is fine being called just Delia, but it reminds me of TechGuy's mom, who has 2 first names as well) has agreed to do an interview with me at some point, and has the sweetest accent.  I think it's from one of the Carolinas.

Alanna got to go out to the barn today with Momma, where the workshop is.  Momma says I need a chair and loveseat if I am to do interviews, and I can hardly disagree with that.

I'm going to hand the laptop over to Alanna now, so that she can tell you all about her afternoon.

Hey guys, it's Alanna.  I had the neatest bonding experience today with Momma.  She hung out with us all this morning after getting back from the local Autism movie day, where she says they watched "Home".  I wish I'd been allowed to go, it wasn't Marvel, but a lot of us love Big Bang Theory, and the guy who plays Sheldon Cooper was the voice of the Alien "O".  I think if I'd have gone though, the kids may have thought I was 'just' a doll (since no one would understand the fact that, while vinyl, we're as alive as you, so long as we receive interaction from Momma regularly).

Anyways... so, she was looking at her laptop for a while, and the next thing we all know, she took it outside with her, all excited.  A bit later, Momma came back in, asking if anyone was willing to go out to the workshop with her. I had on lounge clothes, so I asked her to help me throw on the jean vest I wanted to wear, and out we went.  I haven't gotten to go anywhere with Momma by myself yet, so this sounded like a good time.  She took me out, let me goof off with her laptop, and explained that she wanted to build a set of livingroom furniture for us to use.  She needed someone to help her with the measurements, and to keep an eye on both her and the laptop, since it was her first time using any of TechGuy's power tools.  She used a table saw after we drafted a pattern (this was something I'd never expected to see).  I see Tony Stark make these awesome inventions, but never the blueprints behind them.  I pretended it was Tony's workshop, and that J.A.R.V.I.S. was there with us, telling us what to do. Actually, it was her boyfriend, but it was amusing to pretend. 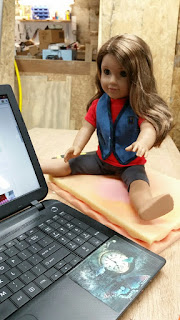 Momma was nervous, since the table saw has one of those huge blades, but she did great.  Then, she got to use the bandsaw, which I think it's become her favorite.  It's got a tiny blade, and when I looked it up, it's used to do 'scrollwork', like what you see on nice wood furniture, the kind with the fancy edges.  I can't wait to work on the furniture with her again, I'm hoping to get to sand or something other than supervise, but apparently vinyl and power sanders don't mix, so we'll see if she lets me sand anything by hand.  We decided to make fancy arm rests for the chair and loveseat, but for now, all we were able to do today was cut out most of the framework.  We've got some work ahead of us, but it's going to be great.  TechGuy says we need a lathe if we want to do the spindly looking decorative poles for beds, and I think Momma may have found her niche, if she keeps doing it.  It didn't look too hard, once she understood all the numbers and how the tools were used.

Oops, long post, here Jaelin, all yours again.  Thanks for letting me blog!

Thanks Alanna.  I'm excited to get furniture like some of the talk show hosts, it feels like I'm going to be a real reporter one day!

I was going to interview Savannah and Dahlia, but we decided to wait until we had a real place to do it.  Also, TechGuy is going to get out his photography stuff for Momma to use (he bought it to photograph his trains... they both really love to photograph their favorite things), so we should have some pretty cool lights and stuff like that to work with.

Type at you later,