It's been a loooong week

Hey guys, Jaelin here! A whole bunch of stuff has happened since my last very short posting. I was supposed to post last Wednesday, but one of Momma's best friends had an emergency, and Momma didn't take her laptop, so I couldn't email her my Journaling for her to edit. And then with the crazy busy weekend (more on that in a bit) and Momma working on Memorial day, well, here we are at Wednesday again!

First on the list: Alanna and Linnea made it back from the doll hospital! I only got to meet and talk to the girls the morning they were admitted, since I didn't get to Momma's house until the night before. She took me to the friend's house mentioned above, so we talked on the drive down. Alanna's really into her Martial Arts and her superhero stuff, and it was on the drive down that Linnea and I decided we wanted to create a blog. Ahh, memories. Anyways... 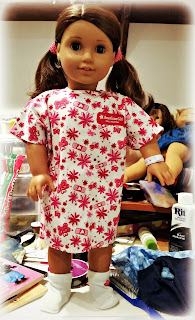 Alanna in her Hospital Attire she was sent home in. She is almost ready to introduce herself to you guys... on momma's website.  We may link to that page when it's all done.

Alanna's throat was a bit froggy for the first day or two, but she's doing great now. Linnea had Momma find her glasses (she's near-sighted) and curl her hair, and she says that now all she needs is the right outfit, and she'll be ready for her debut. (Yeah, she actually called it that. And I don't know what she means by that. She's not anywhere near as "fashion conscience" as Vera is. Linnea is... well, she's interesting. Nothing mentally wrong... but she's such a dreamer, that she's absentminded. Shh, don't tell her I said that!)

Second: Not only did Linnea get her hair done Saturday, Momma had 3 new girls to add to the mix. She hasn't introduced us to them yet, but I'm sure she will. I do know that there is a new girl on our shelf (her boyfriend, TechGuy, hasn't had time [read, space either] to build us rooms, he was busy working on the above ground pool installation this weekend, but he did buy us another shelf so that we don't have to be crammed on the one we have now), who is very sweet, but hasn't told us her name either. All we know is that she didn't think the hair color she arrived with suited her, and had Momma work her magic. She's very happy now... so we'll see when she decides to tell us her name. Momma loves helping us become who we were meant to be. 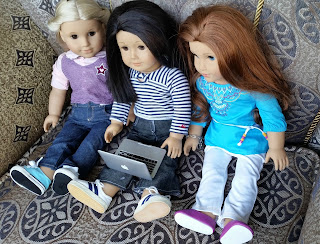 Dahlia, Me (blogging, of course) and the new girl...

Third: Momma may not have been home last Thursday (she stayed the night with her friend), but I logged onto my laptop, and the girls and I all crowded around for the new Truly Me release! I must say, I saw a new cousin, and another new friend on there that seemed really sweet. I'm sure Momma will be saving up funds for the adoption process... if she isn't, I will be encouraging her to do so. After all, I know one of my Tam cousins would love to live here with us. 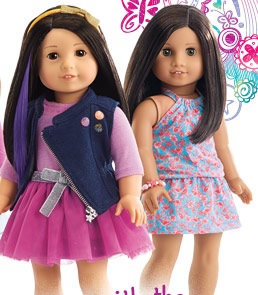 I've been enjoying Sherlock Holmes 1 and 2 a lot since TechGuy downloaded the movie onto my laptop... and I think that I got Alanna to start liking it too! She has been watching it with me, with the agreement that I have to start watching the Marvel movies with her and Linnea. I'm hoping that TechGuy will add League of Extraordinary Gentlemen to my laptop next... it's my other favorite movie, and I KNOW Alanna will like it. (From what I understand, Alanna is my best friend Dahlia's cousin. They look a bit alike, with the same face shape, so I can see that. Alanna is a bit older than us, but doesn't seem to mind me geeking around).

Alanna said she was astonded by the ending of Agents of S.H.I.E.L.D. season finale... Momma waited for her to come back from the hospital, that was what they watched the first day after she'd gotten home. And then Momma watched the season finale of Once Upon A Time with a bunch of the girls (over half of us like OUAT. I don't mind it... but give me Grimm or Lost Girl any day of the week. BTW, not good shows for audiences under 15 or so... ask your parent's permission before watching those! Especially Lost Girl!) Hopefully Momma and TechGuy watch the Grimm Season Finale this week with me! I really really want to see where Nick, Juliet, T.Ruble and the rest of the gang end up! Will have to post all about the show when we do. Maybe I'll get to do another post this weekend even!

We know it's early, and we don't have our personality profiles up yet, but Vivienne (Linnea's sister) and Momma are Planners with a capital 'P', and were hoping I'd mention that they'd like to do a gift exchange for the holidays this year with another group of dolls. So there's my advertisement for it, lol.

Type at you later! I get to go help Momma find vacation destinations for her and her guy's 4 year anniversary now. Where would you like to go if you were on the East Coast, in Pennsylvania. (Momma doesn't do well in the car for longer than 3 hours at a time without a break, so she wants us to keep it to about a 500 mile range.) Feel free to leave her suggestions here!